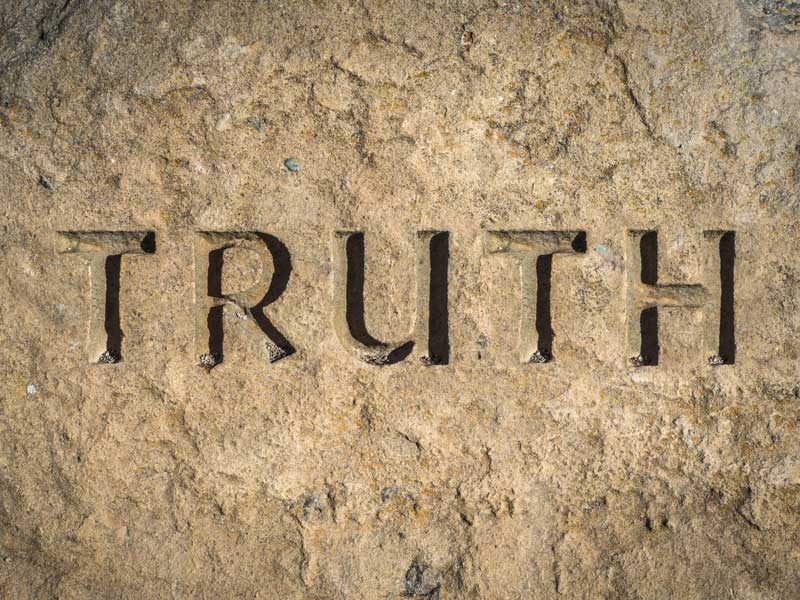 Jim MillerJim is an honorably retired teaching elder of the Presbyterian Church (USA). For most of his career he served as a minister in higher education at Michigan Tech, Carnegie Mellon University and the University of Pittsburgh. However, immediately following seminary, Jim worked in the School of Engineering at North Carolina State University. From 1996-2006 he was the Senior Program Associate for the Program of Dialogue on Science, Ethics, and Religion of the American Association for the Advancement of Science (AAAS). Jim is the immediate past president of the Presbyterian Association on Science, Technology and the Christian Faith and currently serves as co-chair of the Broader Social Impacts Committee of the Human Origins Program at the Smithsonian Institution's National Museum of Natural History. In 2021 Jim was elected a Fellow of the AAAS.
Share
Tweet
Share
Pin

Truthfulness is a central value in both Jewish and Christians traditions. The Ten Commandments declares, “You shall not bear false witness.” (Exodus 20:16) The Gospel of John proclaims, “… you will know the truth and the truth will make you free.” (John 8: 32)

To be fair, the commandment is referring to speaking falsely about one’s neighbor and the Gospel is referring to the truth, it is proclaiming, of Jesus as the Word of God made flesh. Nevertheless, these passages illustrate that the value of truthfulness is reflected in the sacred texts of both Jews and Christians. An affirmation of truthfulness can also be found in the sacred texts of Islam (“O you who believe! Consciously revere Allah and be with those who are truthful.”[Qur’an 9:119]), Hinduism (Truth alone triumphs; not falsehood. Through truth the divine path is spread out by which the sages whose desires have been completely fulfilled, reach to where is that supreme treasure of Truth. [Mundaka Upanishad, 3.1.6]), and Buddhism (“And what is right speech? Abstaining from lying, abstaining from divisive speech, abstaining from abusive speech, abstaining from idle chatter: This, monks, is called right speech.” [Pali Sutta-Pitaka, Samyutta Nikaya 45]).

Truthfulness is also an essential scientific virtue. Accuracy in recording data is truthfulness at the observational level. The truthful communication of research data is essential for the process of peer review, which itself is central to the self-correcting element of scientific practice. Scientists are realists, they seek explanations for observations of nature as it actually is. Yet, while experimental or observational confirmation of an hypothesis, a proposed explanation, may lead to a truthful theory (an explanation that coheres with the evidence), it is not THE TRUTH. Every theoretical truth is open to revision or even rejection in the light of new or persistent anomalous evidence. In one sense truthful scientific knowledge expands by discovering where it is mistaken. It is a commitment to truthfulness that allows anomalies to be recognized, engaged thorough further inquiry, and hopefully resolved in a reformed or new theory (realistic explanation).

When religions assert that they possess THE TRUTH, they open themselves to an idolatry of words. The philosopher Ludwig Wittgenstein wrote, “Philosophy is a battle against the bewitchment of our intelligence by means of language.” (Philosophical Investigations, § 9) “Dogmatic Theology,” namely the foundational commitments of a theological tradition, has a time-honored place in the intellectual life of religious communities. But, when left unexamined in the light of new experience, Dogmatic Theology becomes an idolatrous substitute for the God to whom it seeks to point. This is perhaps an even greater danger for those religious traditions that do not acknowledge that they have dogmatic commitments, implicit rather than explicit.

The Reformed Tradition within which I, as a Presbyterian, stand is not immune from such idolatry, from claiming its confessions of faith are THE TRUTH. For many years, before adopting a book of confessions in 1976, clergy in the Presbyterian Church US were required to subscribe to the 1646 Westminster Confession “as containing THE [emphasis added] system of doctrine taught in the Holy Scriptures.” This despite the fact that the Bible is theologically multivocal. Such theological idolatry is not simply an intellectual error but can have grim historical consequences (e.g., the Spanish Inquisition, the Salem witch trials, chattel slavery, apartheid).

Ironically, the Reformed Tradition also acknowledges that there is no perennial theology declared once and for all time. It intends its theological tradition to be “reformed and reforming.” Originally this expression meant that overtime there were erroneous accretions to the tradition that from time to time had to be excised through a reformation that returned to an authentic original state. However, in the context of the Renaissance, which was a reformation of medieval culture through the recovery of classical ideas creating a new cultural context, the idea of reformation came be taken to mean that there was no fixed statement of TRUTH. This sense of the historical contextually of the truthfulness of a tradition may have been one reason that early modern science flourished in cultural settings in which the Reformed Tradition had become well established (e.g., the Netherlands and Great Britain).

Even in the political sphere, there has been a Reformed recognition that decisions should never be assumed to be based on THE TRUTH. As Oliver Cromwell, the controversial Puritan Lord Protector of the Commonwealth of England, Scotland and Ireland, wrote to the General Assembly of the Church of Scotland regarding their support of Charles II as King, “I beseech you, in the bowels of Christ, think it possible you may be mistaken.”(1650)

Today, we live awash in a Babel of TRUTH claims, unsupported by evidence, mere opinion written large and declared loudly. While there have always been assertions spoken as though they were facts, the liberating advent of the internet, as a means of public communication, has led to the phenomena that comedian Stephen Colbert identified as “truthiness.”

Too often today statements grounded in gut feelings, ideological preferences, cultural biases, and passionate commitments are taken as THE TRUTH without the support of evidence, facts, logic, or critical intellectual assessment. In the public square, in which “truthiness” abounds, the hard-won though qualified conclusions of scientific research based on evidence, facts, logic, and critical intellectual assessment are viewed as simply one more voice in the cacophony.

Followers of Christ, especially those who claim the Reformed Tradition, should not only eschew “truthiness” but should, to draw on Wittgenstein’s insight, do battle against its bewitchment. If the Gospel of John is correct generically, that knowing the truth makes us free, then this is a battle for freedom. Not the freedom of unrestrained license by virtue of absolute knowledge, but the freedom of a faith realistically, even if at best penultimately, grounded in reliable understandings of the actual world that God is creating.

I would assert that the challenge of resistance to “truthiness”, regardless of where one might be on the conservative/liberal political spectrum, is one that must be accepted by all. The creation has its own integrity regardless of what we think about it. Our descriptions of creation (its structure, processes, history) are, at their very best, portraits of creation but more often caricatures. They are fingers pointing to creation not creation-in-itself. Yet, they have proved to be reliable fingers.

So, my ultimate commitment is not to scientific findings nor to theological doctrines nor to my feelings about the world or my life in the world. Truthfully, my faith is in the One in whom “[I] live and move and have [my] being”(Acts 17:28), God, the Ground of Being, the one John of the Epistles declared to be love. (1st John 4:8, 16) Such a commitment can lead to a form of life like that hoped for by the Jesuit paleontologist, Pierre Teilhard de Chardin, when he wrote, “Someday, after mastering the winds, the waves, the tides and gravity, we shall harness for God the energies of love, and then, for a second time in the history of the world, man will have discovered fire.” [from “The Evolution of Chastity,” in Toward the Future, 1936, XI, 86-87].