The War on Science: A book review 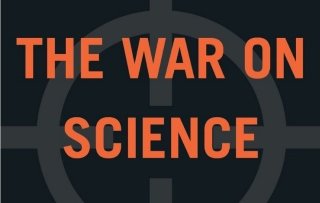 Sara MilesDr. Sara Miles has her Ph.D. in History of Science, with one of her fields being science and religion. She is Secretary/Treasurer of the Presbyterian Association on Science, Technology, and the Christian Faith (PASTCF) and contributes regularly to their newsletter SciTech. She is currently retired, and she and her husband live in Kenosha, Wisconsin.
Share
Tweet
Share
Pin

Otto, Shawn. The War on Science: Who’s Waging It, Why It Matters, What We Can Do About It. Minneapolis: Milkweed Editions, 2016. 426 pages plus notes and index.

When most of us see a book with a title like this one, we groan inwardly and think, “Oh no, another anti-religion book.” However, that is not the case here. Otto indicts religious and anti-religious groups, conservatives and liberals, Americans and non-Americans, the media, scientists, politicians, educators, big business and a smattering of others. In other words, he claims that all of us have, in various ways, contributed to and are responsible for the anti-science movement. Moreover, he does this by amassing the evidence and building his case.

Otto categorizes those who have waged and are waging the war into three groups: the postmodernists, the ideologues, and the industry/public-relations front. The philosophical arguments advanced by the postmodernists have, he asserts, produced a culture in which there are no objective truths or facts. Postmodernist views have taken over academia, and both public school teachers and journalists spread these concepts by what is taught and what is published. Journalists are especially targeted by Otto.

In 1987 the Federal Communications Commission (FCC) eliminated the Fairness Doctrine that had required the broadcasters to present honest, equitable, and balanced treatment of ideas. With the removal of this requirement and the philosophical view that all is subjective, the Society of Professional Journalists in 1996 excluded “objectivity” from its Code of Ethics. The result is that the media have replaced objectivity in reporting with equal time (or space). A scientist is given one paragraph to explain why vaccines do not cause autism, and a mother of an autistic child is given one paragraph to argue that it does — and her child is “proof.” A scientifically illiterate public is then allowed to draw its own conclusions since there is no “objective reality” or “objective truth.”

A statement by Thomas Jefferson precedes the first chapter: “Wherever the people are well informed they can be trusted with their own government; that whenever things get so far wrong as to attract their notice, they may be relied on to set them to rights.”

Otto argues that both republican democracy and science are anti-authoritarian, encompassing both conservatives and progressives. Totalitarian governments are generally anti-science but pro-technology, e.g., fascism and communism. By its nature, science is political. It requires a democracy to flourish and its flourishing supports the democracy. Scientists, however, have insisted during the last 100+ years that science has nothing to do with politics. They have forgotten Bacon’s statement that “knowledge and power go hand in hand so that the way to increase in power is to increase in knowledge.”[1. Otto, p. 43.]

Moreover, the “well informed” public envisioned by Jefferson is no longer well informed about science, in part because scientists now rely on the military-industrial complex for funding and have not seen the need to keep the public informed. As a result, ideologues (political, religious, values-laden), by appealing to the dogma underlying their belief system, can refute scientific findings by using the rhetoric of lawyers and ignoring the reality-based evidence of the scientific community. Since the public understands this kind of argumentation better than that of science, scientific evidence is undermined.

The third group waging the war is composed of corporations whose economic status can be harmed by scientific conclusions, e.g., fossil fuel industries, tobacco industries, agribusiness. These and organizations related to ideological groups fund “anti-science” research and public relations firms to spread propaganda denying and/or contesting scientific findings. The public then hears that there are “two sides” to the issue and either side chooses its “side” based on other biases or decide to do nothing until one side “wins.”

With all three groups, Otto provides examples of battles, not only in the U.S. but throughout the western world and China. These examples are both illuminating and depressing, but they also bolster Otto’s arguments by demonstrating how the war is being waged.

We cannot hope that politicians can end the war, and only 2% of the 114th Congress had science or engineering degrees. Most politicians know little science and feel uncomfortable discussing it. In fact, they would rather discuss religion than science. Otto was one of those behind the group Science Debate 2008 (later ScienceDebate.org) that tried to get the 2008 presidential candidates to discuss major science issues and describe their policies for addressing them. None refused but rather all ignored the request (and there more than 125 million who had signed on to the organization). Instead the candidates held a debate at Messiah College. The list of fourteen science questions (pp. 15-17) are worth studying. The 2012 and the 2016 races were no better.

The first 340 pages of this book are somewhat depressing; science was losing and losing badly. The later portion of the book provides a strategy for reversing the trend and winning the war. To begin with, Otto argues that economics and policies based on Adam Smith’s invisible hand and the externalities of transactions described by Milton Friedman that are largely monetary need to be replaced with an economic theory that is based on limited resources and potentially infinite time, i.e., a restricted supply and unknown future generations.

The biologist Garrett Hardin published a paper in Science titled “The Tragedy of the Commons” in which he argued that “politicians are paralyzed by a fundamental conflict between the environment and the economy that arises from the deeply held but mistaken belief that freedom and regulation are incompatible.”[2. Otto, p. 345.] His position, Otto claims, requires us “to find a balance that protects the equal rights of all individuals by using the anti-authoritarian rule of law — or regulation — and the vote to maximize the overall level of freedom and minimize tyranny.”[3. Otto, p. 348.]

A change in economic theory and its incorporation into governmental policy will provide a counter to the corporations that oppose science, but it will also provide a foundation for foreign policy that incorporates scientific evidence for aspects such as health, technology, environmental sustainability, etc.

This book is required reading for all who want to understand the causes of current intellectual thought, especially as it relates to science, and how it developed. Some of the ideas Otto develops also help us understand many attitudes toward main-line Christianity. It is not a quick read, but it is a valuable one.

Concrete steps to win the war

Convincing economists and politicians to adopt a new economic theory as a basis for public policy will take time. Otto states “There is no one strategy by which the war may be won, no nuclear option, no shock and awe. But there are many individual battle plans.”[4. Otto, p. 371.] He provides 14 plans. They are as follows:

These battle plans cannot all be accomplished in a short time, but some can. No person can be involved in all of the plans, but everyone can be involved in at least one. Otto ends his book by talking about the truth and beauty of science. Quoting the biologist David Sanders, he says “My colleagues think our science is beautiful, but we don’t put any effort into communicating that to the public. We don’t think the public is interested.”[6. Otto, p. 424.] Scientists need to step up.

So does the Church.