Shelved: What can new book releases tell us about faith and science?

While Sam Harris wants to show us how morality is more about science than religion and Stephen Hawking would like to impart that the universe could not be created from nothing or have any help from God, it seems there is a growing interest in discussing religion and science at the local bookshop.

Over the last ten years, a number of denominational publishers such as Eerdmans and Augsburg Fortress have published more books on science and theology than perhaps at any other time in their history. Whether this is a commentary on the scholarship going on in this space or the layman’s thirst for knowledge is unclear.

Your local Borders or independent bookseller isn’t likely to feature a religion and science section, but it is becoming clearer that these newer books from scientists do not fit into pure science and not every religious title can only be shelved under religious studies.

This year, the titles dominating the headlines are challenging the public’s faith in the New Atheists, who have once again starting their printing press in earnest. And so beginning with this group of writers focused on a new age of secularism, welcome to your virtual bookshelf with some of 2010’s more interesting reads.

New Atheists
Traditionally this group of authors includes Sam Harris, Daniel Dennett, Richard Dawkins, Victor Stenger and Chris Hitchens. As critics of religion, this group has held that the public in support of science can no longer take a laid-back attitude in dealing with religion. Their focus is rational argument against religion whenever possible. 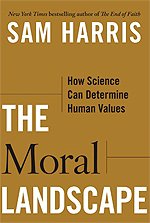 The Moral Landscape: How Science Can Determine Human Values by Sam Harris
This book has gained widespread acclaim for its outline that morals can have a scientific basis rather than a religious one. Harris debunks the idea that science has nothing to say on the subject of human values. For the author of The End of Faith, this book is set to urge readers to think about morality in terms of human and animal well-being. He concludes that there will be a time when science will no longer limit itself to merely describing what people do in the name of morality, but advance to tell us what we ought to do to live the best lives possible. He looks at the basis for human cooperation and views moral relativism as coming at an increasing cost to humanity, and at that point says there is no morality based on religion.On the question of whether humanity needs God to be good, Harris in a Q&A with Amazon.com says: “Religious ideas about good and evil tend to focus on how to achieve well-being in the next life, and this makes them terrible guides to securing it in this one. Of course, there are a few gems to be found in every religious tradition, but in so far as these precepts are wise and useful they are not, in principle, religious. You do not need to believe that the Bible was dictated by the Creator of the Universe, or that Jesus Christ was his son, to see the wisdom and utility of following the Golden Rule.” 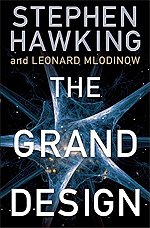 The Grand Designby Stephen Hawking
Hawking is technically not a New Atheist, but has drawn a lot of attention with his latest book that takes on the bigger questions regarding where the universe came from and where it is going. According to Hawking, it was Einstein’s dream to discover the grand design of the universe and a single theory that explains everything.By the time Hawking began writing A Brief History of Time, there were several advances that brought science closer to this theory of everything. The latest Hawking endeavor is a sequel to his first book and his way of answering the ultimate question of life, the universe and everything.As Stephen Hawking recently began promoting his new book, his assertion that the universe doesn’t need a God or gods in its formation has brought the religion and science topic once again to foreground.

Hawking’s latest book was at one point the No. 1 book on Amazon and has received much hype via Twitter. According the New York Times review of the book, the book seeks to answer the question of “How did the universe begin?” and led Hawkins to say the universe’s creation doesn’t “require the intervention of some supernatural being or god.” The reviewer makes the apt point that books on religious conflict are easier to argue about than those that parse the finer points of quantum physics.

In an interview with ABC News’ Diane Sawyer earlier this year, Hawking said, “What could define God [is thinking of God] as the embodiment of the laws of nature. However, this is not what most people would think of that God…. When you look at the vast size of the universe and how insignificant an accidental human life is in it, that seems most impossible.”

The Laymen and synthesizers

More journalists are getting involved in the dialogue. Traditionally these books generally take a bent to including theologian and scientist insights. Many efforts in the area have been about topics such as Intelligent Design, Scopes Trial or evolution and religion in general. 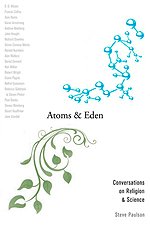 Atoms and Eden: Conversations on Religion and Science by Steve Paulson
Released in this month, this promises to serve a tricky sub-section of America these days — the middle. Steve Paulson, who is executive director of Wisconsin Public Radio, has put together a book of 21 interviews of personalities ranging from the left and right of the religion and science spectrum.Paulson is also executive producer of Wisconsin Public Radio’s nationally syndicated program To the Best of Our Knowledge. Arguing that religion and science have become polarized camps in modern American society, Paulson seeks a fair-minded middle ground. His interviews with 21 leading thinkers, in fields ranging from neuroscience to evolutionary biology to the history of religion, are said to be generally brisk and engaging. While the book is aimed at the general reader, things get heady when talk turns to string theory and quantum mechanics.Many of Paulson’s interviewees are internationally renowned, such as evolutionary biologist Richard Dawkins and neuroscientist Sam Harris, both authors of best-selling books critical of religion (The God Delusion and The End of Faith, respectively). Francis Collins, director of the National Institutes of Health and former head of the Human Genome Project, is an evangelical Christian who considers God the “author” of the evolutionary process. Paulson’s conversation with legendary primatologist Jane Goodall closes the book. 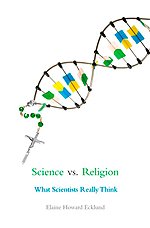 Science vs. Religion by Elaine Ecklund
A Rice University sociologist, Elaine Ecklund surveyed in her book nearly 1,700 scientists and interviewed 275 of them. She found that nearly 50% of scientists are indeed religious and others she calls “spiritual entrepreneurs who seek to work with the tensions between science and faith outside the constraints of traditional religion.” The book features profiles of men and women working in the natural and social sciences at top American research universities.

A growing number of theologians affiliated with a variety of denominations are publishing their views with increasing regularity. Many of these books are more academic in nature, but are the only purely religious offerings in the religion-and-science endeavor. 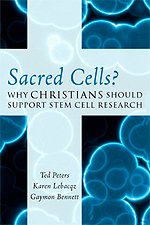 by Ted Peters, Gaymon Bennett and Karen Lebacqz
This book is being released in paperback in September 2010 and is by scholars at the Center for Theology and Natural Sciences in Berkeley, California. Sacred Cells? documents the reasons why Christians should support stem cell research. Documenting various ethical frameworks used in approaching the issue as well as providing a brief overview of the science behind it, this book moves to embrace stem cell research and the possibilities that it offers. Originally published in 2008, this text remains an essential resource for anyone with interest specifically in the contemporary debate over stem cell research or more broadly in the dialogue between science and religion as a whole. 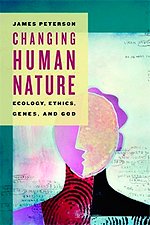 Changing Human Nature: Ecology, Ethics, Genes, and God by James Peterson
In a paperback that is due out soon, James Peterson looks at the issues of genetic engineering and offers up an informed Christian defense of genetic intervention. The book asks a number of important questions related to genetics and provides answers from a perspective of humanity’s God-given calling, which he says is to positively shape our environment and ourselves, including our genes.Peterson has served as a professor of theology and ethics on three continents and has given lectures at Harvard and Oxford Universities. He is currently professor of theology and ethics and the Roy A. Hope Chair in Theology, Ethics and Christian Worldview at McMaster University. And he also holds a second appointment at McMaster as a member of the University’s Faculty of Health Sciences. Previously he has published a book called Genetic Turning Points: The Ethics of Human Genetic Intervention.

The Trinity and an Entangled World: Relationality in Physical Science and Theology 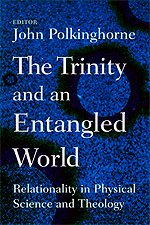 by John Polkinghorne
Polkinghorne, who is well known for his work as a theologian and physicist, has inspired thirteen distinguished scholars from physics and theology to explore the role of relationality in both science and religion. The book aims to analyze how these parallel insights can contribute to a harmonious dialogue between science and religion. In addition to Polkinghorne, included in the book are: Lewis Ayres of Durham University; Jeffrey Bub of University of Maryland; Sarah Coakley of University of Cambridge; and Michael Heller, a Polish theologian, cosmologist and philosopher. 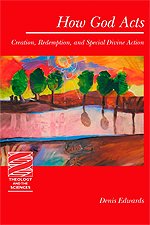 How God Acts: Creation, Redemption, and Special Divine Action by Denis Edwards
The latest work from theologian Denis Edwards looks at how the Christian doctrine of creation square with the picture of an evolving universe. Looking at a noninterventionist model of divine action does justice to the universe as we know it and how it is also central to convictions of Christian faith about the goodness of God, the promises of God and the fulfillment of creation. He presents a theology supporting a vision of how God is at work in the universe.