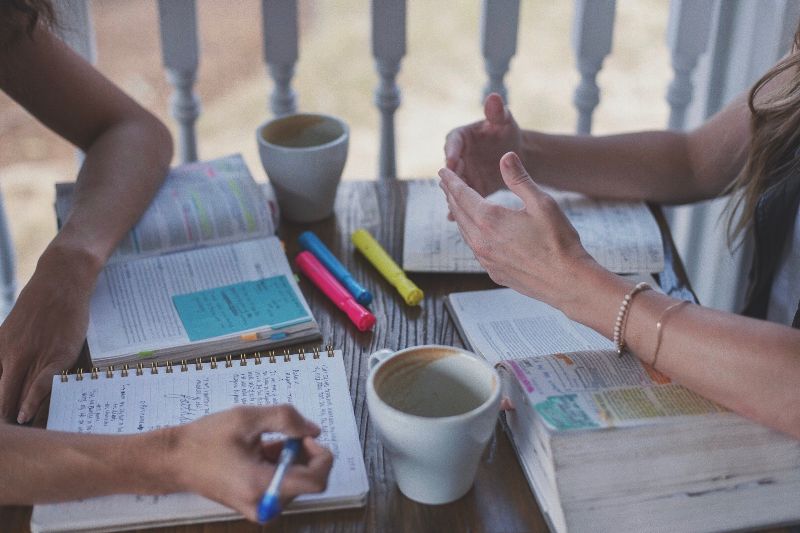 This fall students entering seminary brought more than their mask and laptop. Some have been pondering science anew as they prepare to lead congregations that may have scientists in the pews.

Over one dozen U.S. and UK seminaries this past spring were awarded grants to do some core work in creating curriculum that incorporated scientific topics. Theologians and scientific advisors came together over the summer to brainstorm ways to design impactful topics to bring to the classroom.

This is the kind of work that astronomer and ELCA church member Grace Wolf-Chase has been involved in for years through the AAAS/DoSER Science for Seminaries grants. She’s collaborated on coursework at seminaries the Lutheran School of Theology at Chicago (LSTC); McCormick Theological Seminary; Mundelein Seminary and the Catholic Theological Union.

While the seminaries design the curricula themselves, Wolf-Chase has been providing them with training on a citizen science platform Zooniverse.

“Citizen science helps to put a human face on science and scientists, and highlights science as a process in which everyone can engage with at some level,” she added in discussing the interest in getting religious organizations involved with Zooniverse projects.

At Hood Theological Seminary In North Carolina, Wolf-Chase recalled working with Sharon Grant in showing the true power of citizen science. Students were asked to write of their experiences of citizen science in 2020.

Hood Theological Seminary created in 2019 the International Center for Faith, Science and History (ICFSH) as an international platform to address increasing secularization, isolation and despair of individuals within postmodern North American society. The DoSER grant deliverables included the revision of two required courses at Hood, one international immersion course at Trinity Theological Seminary in Accra/Legon, Ghana, a podcast, a science summer camp for the surrounding Hood community, and two campus events.

This autumn, even more theological curricula are folding science into key coursework including: Pandemics and Christianity at Methodist Theological School in Ohio (MTSO); Science and Biblical Imagery at the Academy for Jewish Religion; The Gospel of Jesus Christ in Big History at Saint Meinrad Seminary and School of Theology in Indiana, while coursework will incorporate ecology, the science of learning and neuroscience will be offered at the University of Dubuque Theological Seminary in Iowa.

Beginning this fall, Portland Seminary in Oregon is revising two courses: Essentials in Christian Theology and Awareness & Identity II. The former will be revamped to include a discussion of social-scientific research on the connection between religious participation, healing and health. The latter will incorporate a new section engaging cognitive sciences and the relationship between neuroplasticity, spiritual formation and religious experience.

“One of our key strategic priorities is to become a university known for the integration of science education and the Christian faith, and the promotion of intellectual Christianity,” said Ekaterina Lomperis, who, along with fellow Portland Seminary professor Dan Brunner, is the principal of the grant. “We look forward to using this grant to strengthen our work of intellectually equipping our students to interact with science as an ally, rather than as an adversary, of Christian faith.”

Meanwhile, in the U.K., another eight seminaries received funding from the Templeton Religious Trust to promote ‘science-engaged’ theology.

Nazarene Theological College in Manchester initially has been focused on a unit that engages students with Science and Theological Ethics, and which will act as one focal point for undergraduate engagement with scientific themes and questions.  A new undergraduate module exploring Contemporary Issues in Science is being developed for September 2022 delivery. The MA in Theology and Ecology will be developed and enhanced as part of the Science for Seminaries project as well.

At London School of Theology, the plan has been to integrate science into ongoing classes such as Introduction to Doctrine, which explores scientific perspectives in relation to various theological topics. A second course on Person and Work of the Holy Spirit will engage with environmental science and creation care.

Wycliffe Hall in Oxford plans on redeveloping the core Introduction to Christian Doctrine course to include scientific input across three key lectures. A lecture on the doctrine of creation will be updated to include perspectives from environmental science; a lecture on theological anthropology will explore issues of human distinctiveness compared to animals; and a lecture on evil will engage with scientific insights on the problem of evil.

The University of Aberdeen’s Divinity School is home to three undergraduate and four postgraduate programs in theology. In the 2021-22 academic year, the Divinity School is reworking the Introduction to Christian Theology module to integrate scientific topics such as the Big Bang, quantum mechanics, evolution, AI, and end of life issues with theological considerations of creation, theological anthropology, and redemption. A separate new core module for ministry students on Utopia and Apocalypse: Dreaming the Perfect World in Science and Religion will be developed for launch in Autumn 2021/2.

Ripon’s focus is on redeveloping a core module on soteriology, currently taught to all second-year students, by including perspectives from empirical psychology and environmental science. New material at the institution just outside Oxford will explore the doctrine of sin and addiction, theories of atonement and the ‘affective salience’ of doctrine, the psychological role of ritual, transhumanism, and the salvation of non-human animals. In addition, the Introduction to Christian Ethics course will be revised to include greater interaction with climate science and environmental ethics.

The group overseeing the U.K. grant effort, Equipping Christian Leadership in an Age of Science (ECLAS) is based at Durham University and has been also working in partnership with the DoSER program in the U.S. Similarly, the seminaries in the U.K. will be holding public conferences on a variety of faith and science topics.

The Reverend Professor David Wilkinson is co-director of ECLAS and principal of St. John’s College at Durham University. He views the success of the groups’ efforts as having a generational impact.

“Science and theology can be brought into rich dialogue if we only take opportunities to do so,” Wilkinson said in a statement. “We are delighted to award our Science for Seminaries grants to the successful colleges, all of whom have creative ideas for engaging science with theology in their training for ordinands. Through these awards we will see future generations of church leaders given a grounding in science that will help them to preach persuasively, pastor responsively, and take delight in creation.”

The question remains if there will be yet another round of grants following these. Given the popularity and the potential lasting impact of this effort directly on congregations, the interest in continuing the coursework seems to be growing.