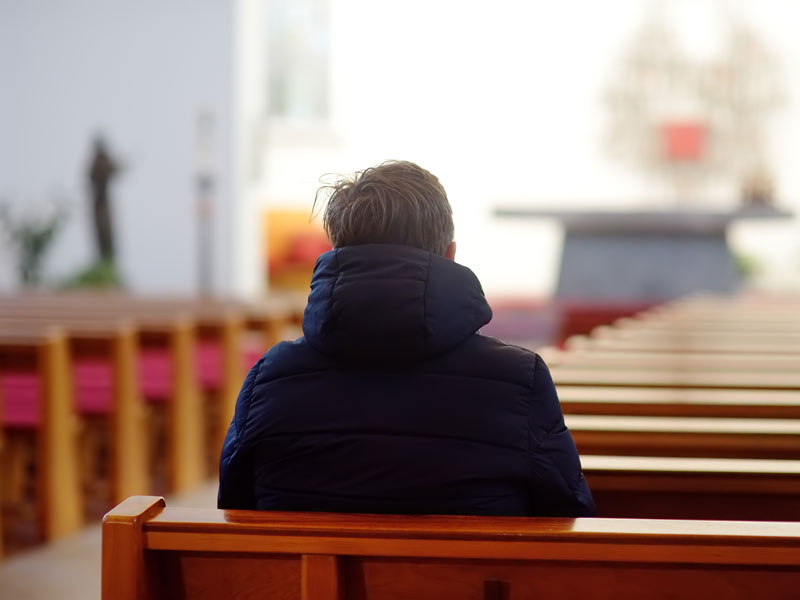 In the beginning, there was a perception of conflict. Simply it stood between what we saw with our own eyes and the sense there was something more, an ultimate, a transcendent beneath what humans could touch, taste, see, or readily explain.

Perhaps that is why we began telling origin stories thousands of years ago around campfires. Those gatherings around a fire provided not only light and heat, but a place to share knowledge for a community yearning for something more.

Fast-forward thousands of years, and we individually sit by the glow of our (many!) screens. We are just as uncertain of where humanity is headed as perhaps our ancestors were. At the same time, the story of how we got here continues to unfold along a narrative shared online that is solidified almost daily by new scientific discoveries.

According to some, these scientific explanations of how humans came to be is in conflict with their personal faith and the biblical account in Genesis.

Jay D. Johnson in this month’s Covalence outlines the complexities at the heart of evolutionary theory and the fall. He brings his own unique perspective from his experience at BioLogos, founded by now retired NIH Director Francis Collins.

Johnson’s work asks the relevant and logical questions in a compelling bid to bridge the gaps between science, Young Earth Creationism and the tragic loss of faith on the part of young people.

He outlines concepts that are both coherent with science and faithful to theological inquiry.

Speaking of faithful life of inquiry, on December 26 the so-called ‘natural heir’ to Darwin E.O. Wilson died at the age of 92. Nicknamed ‘ant man’, Wilson often joked that while most kids go through a ‘bug’ period he never grew out of his. His in-depth study of the ant kingdom hierarchy led Wilson to discoveries of ant behavior that he later applied to the understanding of human origins, human nature and human interactions.

One of his famous quotes on religion, may come as a surprise.

“Religious beliefs evolved by group-selection, tribe competing against tribe, and the illogic of religions is not a weakness but their essential strength,” he wrote. He is said to have viewed religious practice as a byproduct of evolution, although he personally had drifted away from organized religion.

But is that the path of anyone who is observant of evolutionary theory and its history? Not necessarily, according to groups such as the Clergy Letter Project, which is encouraging congregations to once again celebrate Evolution Weekend on February 11-13, 2022.

The theme of this year’s weekend is “The Pandemic, Climate Change and Evolution:  How Religion and Science, Working Together, Can Advance Our Understanding.”

Public figures such as NIH Director Dr. Francis Collins have publicly supported help from clergy in encouraging vaccine uptake. Collins announced in October his intention to retire from the NIH, but as the Omicron virus proliferates, so does the lingering question of what the long-term impact will be on the church.

Whether it’s vaccines, masks or in-person events, all of us are left making decisions that may vary depending on our shared understanding of science at that moment.

Recent news stories have outlined the devastating impact COVID-19 has had on church attendance and membership, with one pastor recently commenting in The Washington Post that he began to question his usefulness during the pandemic as he saw people suffering whom he couldn’t reach through Zoom.

The pandemic has forced some pastors to retire early, according to surveys. It has also challenged seminary educators who have been forced to move classes online as the task of enticing future leaders to ministry looms large.

Yet along with a public image of a weary pastor there has been the picture of defiant individuals declining vaccination on religious grounds, sparking public ire over churches having had little to say in an affirmative way.

The headlines, including some that question the future of church membership, still uphold the false dichotomy between science and faith.

The narrative leaves one seeking a more meaningful dialogue. The Eastern Orthodox Patriarch Bartholomew recently highlighted the need for an understanding of the value of science by those in the church. Especially in understanding the pandemic’s impact.

The Patriarch said in his Christmas Day message, “Science, to the extent that it operates as a minister of man, is a priceless gift by God.”

The wonders of this gift of science this past Christmas season were plentiful too. The discovery of new treatments in relation to COVID-19 brought some hope despite the Omicron variant’s rapid acceleration. Then notably the Christmas Day launch of the James Webb Telescope brought with it the promise of offering new views of the earliest moments of the universe.

Yet the headlines persist of declining church membership, one reason for some being conflicts with science.

It is well worth remembering that while our ancestors sought to explain so much of their daily world in narrative form, that in the year 2022 we are blessed to have so much more knowledge literally at our fingertips.

How we in turn use that knowledge can truly be a faith-filled endeavor.