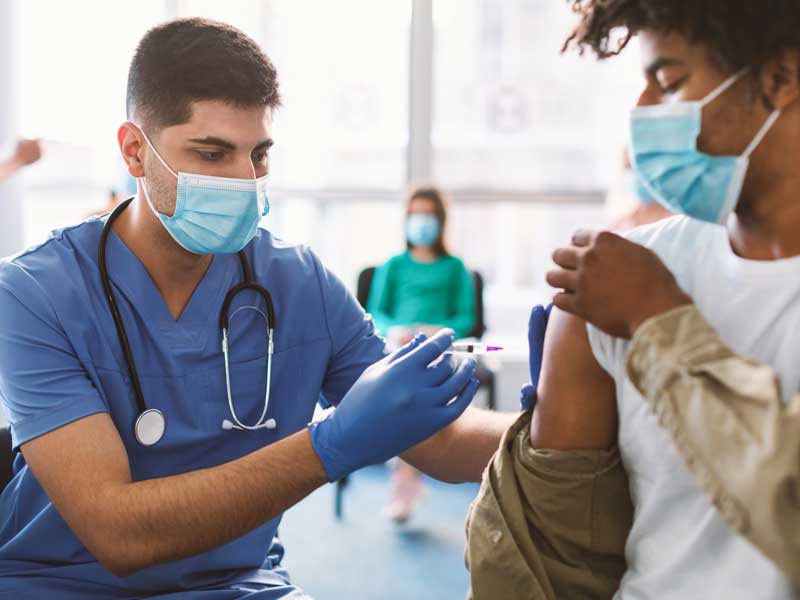 The Public Religion Research Institute (PRRI) and the Interfaith Youth Core found in the largest survey on religion and COVID-19 to date that faith-based approaches continue to offer opportunities to encourage vaccination.

The research backed by the John D. and Catherine T. MacArthur Foundation pointed both political and religious identities in play in vaccine uptake.

“The good news is vaccine hesitancy is down and acceptance is up, as faith-based approaches still have the potential to be effective for hesitant and refusing groups. We know there are many out there,” said John Palfrey, president of the Chicago-based John D. and Catherine T. MacArthur Foundation, in an online presentation of the findings. “There is evidence that these strategies have impacted decisions by individuals within communities so that is extremely positive news.”

Within religious groups, the MacArthur-funded study found that the most vaccine hesitant religious groups are Hispanic Protestants and White Evangelical Protestants. Both as of June 2021 have seen their acceptance of the vaccine increase by more than 10 percentage points since March 2021. Yet, White Evangelicals make up one-quarter of those refusing to take the vaccine.

Officials at PRRI said that its most recent 2021 survey showed that vaccine hesitancy has decreased among all Americans, including across all religion and demographic subgroups. What the survey found though was barriers to vaccine access, such as time constraints, concerns about side effects, and lack of reliable transportation, have discouraged some from getting vaccinated, especially among communities of color and younger Americans.

“As religious leaders work to build community trust in the COVID-19 vaccine, they should simultaneously provide services that help eliminate barriers so that all willing populations are receiving vaccinations,” said PRRI CEO and Founder Robert Jones. The barriers to access disproportionately impact Black, Hispanic, and young Americans, many of whom are otherwise receptive to getting vaccinated, Jones said.

“Faith-based approaches have been and will continue to be effective in convincing Americans to receive a COVID-19 vaccine,” said IFYC Founder and President Eboo Patel. “As we examine exactly what it is that is working in encouraging Americans to get vaccines, it is clear that community-based interventions are critical. By working together to encourage vaccination among hesitant populations, we are saving lives.”

The numbers tell the story. As of the end of June, more than seven in 10 Americans (71%) surveyed are vaccine accepters, including two-thirds of Americans who said they had received at least one dose of COVID-19 vaccine and additional who say they will get vaccinated as soon as possible.

Among religious Americans, 85% of Jewish Americans are most likely to be accepting of the vaccine, while White Catholics (79%), other non-Christians (78%) and other white mainline Protestants (74%) are accepting of the COVID vaccine. This represents a bump of 11-15 percentage points in each group from March 2021 to June 2021.

Hispanic Catholics saw the biggest jump of all religious groups from 56% accepting the vaccine in March to 80% by June.
Holding steady is vaccine refusal are Americans who are Republicans living in rural communities under age 50. The highest refusal rate among religious groups remains white evangelical Protestants, 24% of which who say they will not get vaccinated. They all say universally too (94%) they will not get their children vaccinated.

Faith-based approaches to promote vaccine uptake, meanwhile, include encouragement from religious leaders and religious groups helping to disseminate information and provide resources. Researchers say that these approaches have had an impact.

Vaccinated Hispanic Protestants (40%) and Black Protestants (30%) are most likely to say that one or more faith-based approaches helped to convince them.

Interestingly, frequency of church attendance does not appear to have the same impact on vaccine acceptance as it did in March. Currently, there are no meaningful differences across religious groups between those who attend religious services at least a few times per year and those who seldom or never attend services. This shift is notable particularly for white Evangelical Protestants, the PRRI survey found. In March, more frequent church attenders were less likely than infrequent church attenders to be vaccine acceptant, but that gap has closed in the June data.

What approaches work in increasing vaccinations within various faith communities?

“And so, we think we’re at the kind of phase where we need to be focusing our efforts in encouraging the uncomfortable and really vaccinating the persuaded, and it’s absolutely clear that faith-oriented, faith-sensitive ambassador and community health worker approaches have been an important part of this,” said Interfaith Youth Core’s Patel during the webinar on the groups’ findings.

Religious leaders have a role to play too as one in five or 17% of Americans said that they would look to a religious leader for information when deciding whether to get a COVID-19 vaccine, particularly among those who have refused to become vaccinated so far.

Religious communities also have a role to play in getting children vaccinated once a vaccine is fully approved for all children.

Slightly more than one-third of Americans who are parents of children under age 18 (35%) say they will get their children vaccinated as soon as they can.

More importantly figures show that again, White Evangelical Protestants and Hispanic Protestants were the least likely religious groups to say they will get their children vaccinated as soon as possible.

Interestingly though, nearly 60% of Americans say that children should not be allowed to attend public school without receiving required vaccines even if they have religious objections. But the number of Americans who opposed religious exemptions has actually dropped from 73% in January 2021.

The researchers thought that the religiously based vaccine refusals could be due to the newer roll-out of the COVID-19 vaccines for teens were top of mind in June.

Clearly a minority support vaccine refusals based on religion. More than one-third of Christians (35%) and members of other non-Christian religions (36%), as well as 29% of both Jewish Americans and unaffiliated Americans, support religiously based vaccine refusals.

Community ambassadors and the researchers remain hopeful that those supporting religious exemptions to the COVID-19 vaccine will continue to decrease as the school year begins and parents of younger children prepare for vaccination.