Look up for a new view, new perspective 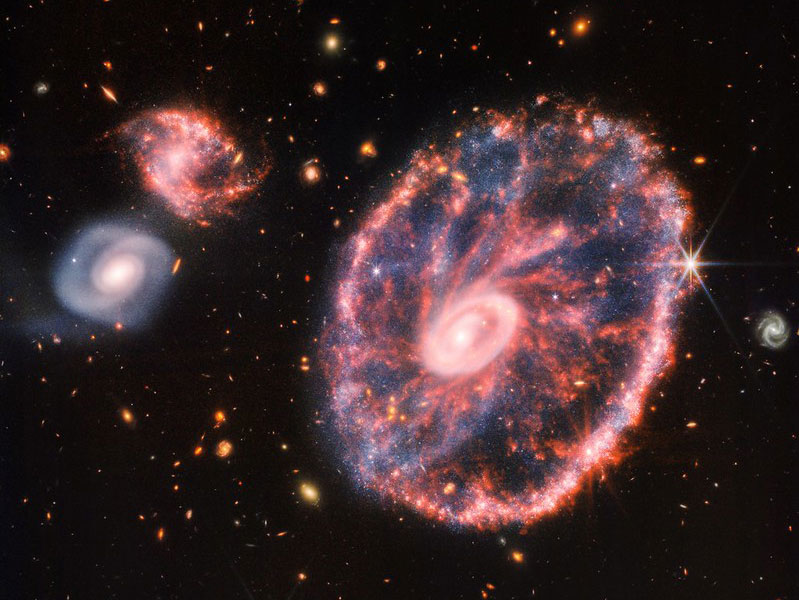 Earlier this summer, the world welcomed the initial images from the James Webb Telescope, and just as awestruck as the rest of us was Vatican Astronomer Brother Guy Consolmagno.

“The science behind this telescope is our attempt to use our God-given intelligence to understand the logic of the universe,” wrote Consolmagno. “But as these images show, the universe is not only logical, it is also beautiful. This is God’s creation revealed to us, an in it we can see both his astonishing power and his love of beauty.”

Now this is not to say that there is some design at work here or that the universe always makes logical sense. But this is more about the realization of what little we know, still. (And yes, dark matter is still a mystery!)

The images are of the deepest infrared view of our universe that has been taken. According to a statement from NASA Administrator Bill Nelson views Webb as helping us understand the answers to questions we don’t even yet know to ask. He adds that those questions include those that “will help us better understand our universe and humanity’s place within it.”

The mission’s primary goal is to shed light on our cosmic origins, which implies something weightier than your typical scientific aim. It may seem like a tall order too, but the scale cannot be disputed. The telescope sits 1 million miles away from Earth and the images are of galaxies formed 13.2 billion years ago.

To put this in perspective, for us on Earth looking up the field of view from the first image from Webb is approximately the size of a grain of sand held at arm’s length. And officials say these images, including the “Wagon Wheel Universe” released earlier this month, are just the beginning.

The time scale and distance alone inspire awe when you realize that what we know about the universe is rapidly changing. But what kind of view does that offer us, as people of faith?

Considering the immensity of the cosmos and the amazingly beautiful images that can be found on NASA’s James Webb Telescope website, it got me thinking about the ELCA National Youth Gathering’s theme for this year’s canceled event — “Boundless.” As in God’s love is Boundless! But so is the creation, which after all gives us a revelation of God’s very nature.

As you may remember, the Lutheran Alliance for Faith, Science and Technology, was slated to have a booth at this year’s event. We hope to bring forth a virtual version of our booth in a future edition of Covalence soon. But the aim of much of the planned booth experience really was passing on the steering committee’s awe for what science has conveyed to us about God and the creation.

Back in 2018, retired ELCA Pastor and astronomer Bruce Booher asked youth in the exhibit hall whether they were interested in holding a piece of another world in their hands. He would hand them a meteorite, which indeed is just that — a piece of another place outside of our atmosphere.

Booher was met with joy, wonder, some laughter and amazement. That seems to be an appropriate response to the creation.

What was your response to the James Webb Telescope images? I imagine it was similar in seeing something so far away and possibly in palm of your hand on the screen of a smart phone.

Let’s be thankful for the science and technology behind the new views of what lies beyond what we can see in the night sky. It is with this appreciation that adds to our gratitude for the everyday infiniteness of God.

As summer’s days dwindle, take some time to look up at the night sky. You may just be amazed at what you see.