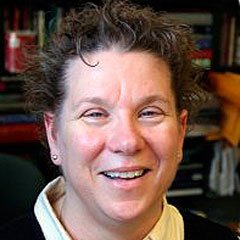 Although Gayle Woloschak spends her days in the laboratory of Northwestern University, she recalls that she could have easily been a philosopher.

Perhaps it was the secondhand copy of Darwin’s Origin of the Species that her mom gave her to read at a tender age, or maybe it was her long-standing membership in her church, but at some point it became clear that she was destined to bridge a gap that even most philosophers shy away from. That’s because in recent years, Gayle has been drawn further into an interdisciplinary and sometimes even an interfaith dialogue centered on why religious belief and science are not mutually exclusive in telling us about the world around us.

Gayle Woloschak is well-known for both her work as a molecular biologist at Northwestern University’s Feinberg School of Medicine and her leadership of the Zygon Center for Religion and Science — an organization housed at the Lutheran School of Theology at Chicago that brings scholars from all over the globe to discuss the basic issues of human concern and how they relate to religion and science.

An active member of the Ukrainian Orthodox Church, Woloschak a number of years ago heard about a unique set of lectures at the Zygon Center called the Epic of Creation, which presents details on the origins of life from a scientific and religious viewpoint. She was drawn to the discussion and eventually began presenting a lecture that she still gives today on the origins of multi-cellular life.

In the lab, her work centers on understanding how the body responds to radiation, whether it be very low doses that one might encounter in an occupational setting or the high doses that are associated with patients exposed to radiation as a therapy for cancer. Her second major project involves the development of nanodevices to be used for simultaneous imaging and therapy of cancer. This work is trying to develop tools that can be used to image cancer with different modalities (CT, MR scans) and then treat the cancer when it is found.

Today she is also associate director of the Zygon Center and assists with the Hyde Park Student Society. Woloschak recently was part of a group that won a grant from the John Templeton Foundation to pursue the relationship between science and Orthodox religion in North America. Woloschak along with Daniel Buxhoeveden and Dennis Poole at the University of South Carolina will establish a North American network of interested academics and clergy with an interest in approaching science and religion from an Orthodox Christian perspective.

The focus of the planning grant is to identify interested individuals, establish links with the Eastern Orthodox Church in North America, catalyze scholarship and publications, and begin to establish a not-for-profit institute with a website and mailing list.

Woloschak and Buxhoeveden are in the process of collaborating on a book focused on the key questions of science and religion. Among Orthodox scholars, Woloschak has led and organized student groups, public events and talks and has served on numerous committees in the Orthodox Church.

She has also taken on work within the Lutheran church in putting together a course for ELCA seminarians called The Future of Creation, which analyses the environmental crisis from scientific, religious and public policy viewpoints.

Although she personally has never viewed religious and scientific perspectives as being in conflict she believes that the issue of evolution has divided many and has stopped many from asking the tough questions. People may become hung up on the idea that we are just animals or that we are more than animals and yet miss out on the big question of who we are as humans, according to Woloschak.

When it comes to looking at the grand role of faith and evolution, Woloschak finds richness in realizing the inter connectivity of humanity and creation. “I see creation as something that is continual and is ever changing, that’s what evolution is about. Evolution is a that creative and changing force in nature that renews, restores and rekindles life,” she says.

For now, Woloschak is content playing the role of educator in creating coursework for ELCA seminarians and educating the general public on the connections between evolution and theology via grants and projects with those interested in strengthening faith and greater scientific understanding across the United States.