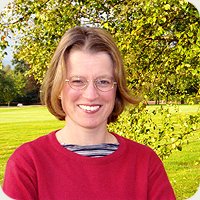 There have been many challenges over the years at the intersection of faith and biology. Yes, we know we are human, but we like to think we are something more than our nature or genetic make-up.

Human uniqueness from our animal brethren is not something all theologians or scientists have the time to ponder in their daily work. For Celia Deane-Drummond it is more than a recent preoccupation. Her journey into learning about nature meandered into a lovely detour of theological visions of nature from a variety of viewpoints. She is now completing work on a series of lectures for the 2012 Religion and Science Conference at Goshen College in March. The theme of her presentation is “Re-Imaging the Divine Image: Humans and Other Animals.”

According to Deane-Drummond, humans are indeed part of the natural world, but also apart from it in that there are distinctive marks of the human. These distinctions emerge from an evolutionary background in the capacities for more sophisticated capabilities that do not simply appear, but evolve through enhanced cognitive capacities and through our cultural and social learning.

Perhaps the key and obvious difference is that we as humans practice religion. Deane-Drummond says that there is a huge debate about the extent to which religion evolved as an adaptation or through some other capability. Questions abound as to whether there is a link with genetics or whether we are not “hard-wired” for religious belief.

The evidence for “hard-wired” is somewhat thin, but even so she says it is not necessary from a theological perspective to rule it out. “What is more problematic is when religious belief is explained away by evolutionary mechanisms,” she says.

These are not new topics for her and she has written extensively on religious belief and our human nature. Recommended reading for the Goshen conference is the book by Deane-Drummond and David Clough, eds., Creaturely Theology: On God, Humans and Other Animals (London: SCM Press, 2009).

Looking at religious capability in humans and agreeing on its origins and importance is not easy especially when it comes to working it all out on a practical basis as part of a theological mindset. For example, many compare human emotion to that of primates and find that even primates may have a sense of right and wrong and even altruism.

For Deane-Drummond using human language to describe what goes on in the non-human world can show anthropomorphism in the wrong sense. In ethology (the scientific study of animal behavior) anthropomorphism is attractive as a heuristic tool, but in such cases what looks like similar behavior may be either an example of extension or analogy, she says.

This human/non-human divide is where her current theological focus has been. Her viewpoints are far from being formed in a theological ivory tower, though she has studied many aspects of biology and began by focusing on nature, a focus that eventually led her to a curiosity about spirituality.

Deane-Drummond’s research began as she studied for her post doctorate at the University of British Columbia, where she came across thinkers within the evangelical tradition and started reflecting on spiritual writing in periods of waiting during her laboratory experiments on plants. She began to find theological concepts more interesting in the light of her growing understanding of science.

Upon returning to the U.K., she continued her natural sciences studies at Cambridge University. She obtained a doctorate in plant physiology at Reading University prior to two postdoctoral fellowships at the University of British Columbia and Cambridge University. At Cambridge, she became interest in the science and religion dialogue through Martin Palmer, an Anglican theologian who works with a group called the Alliance of Religions and Conservation. She was also drawn to the work of leaders in the religion and science dialogue such as Arthur Peacocke, a British theologian and biochemist.

She then continued her work at Durham University, where her studies led to some of the ethical questions related to biotechnology and worked next to a lab where genetically modified organisms were being studied. Ecologists at the time (1980s) were equally concerned over GMOs. At Durham, prior to turning her attention more fully to theological study, she obtained an honors degree in theology.

Around this time, Deane-Drummond decided to train to become a deacon in the Anglican Church, but then became interested in the Catholic tradition and ended up completing an honors degree and then a doctorate in systematic theology from Manchester University.

Ultimately, she was asked to take part in an expert committee on Science and Religion at the Vatican, culminating in a conference on Darwinism in 2009. From 2000 to 2011, she held a professorial chair in theology and the biological sciences at the University of Chester, and was Director of the Centre for Religion and the Biosciences, launched in 2002. Deane-Drummond has also been active in the Catholic Fund for Overseas Development in applying her faith and scientific knowledge. She has also been involved in a number of conferences including the 2009 UN Summit on Climate Change, working with the CAFOD spirituality team explicitly in the area of environmental justice and climate change.

In May 2011, she was elected Chair of the European Forum for the Study of Religion and Environment. She also was editor of the international journal Ecotheology from 2000 to 2006.

Deane-Drummond is currently full Professor in Theology at the University of Notre Dame. She took up this position in August 2011 and her unique appointment is concurrent between the Department of Theology in the College of Arts and Letters and the College of Science. She was elected Fellow of the Eck Institute for Global Health at the University of Notre Dame in September 2011. In December, she was also named a fellow at the John J. Reilly Center for Science, Technology and Values at Notre Dame.

During her scientific career she has lectured both nationally and internationally and published over thirty scientific articles. She has focused on areas relating theology and theological ethics with different aspects of the biosciences, especially ecology and genetics.

A lecture following her series at Goshen College will be at the Zygon Center for Religion and Science in Chicago, where she will participate in the Advanced Seminar Course in April with a talk entitled, “God, the Emergence of Human Freedom, and the Question of the Animal.”

Donning her theologian’s hat, Deane-Drummond is also leading a new study on evolution and human nature, heading up a team of theologians, philosophers and scientists in residence at the Center of Theological Inquiry at Princeton University in New Jersey.

Deane-Drummond will serve as a senior research fellow along with Dominic Johnson of the University of Edinburgh. Together they will create an interdisciplinary dialogue “Inquiry on Evolution and Human Nature.” Princeton’s Center of Theological Inquiry will put together a team of 10 other scholars in the fields of evolution biology, psychology, anthropology, religious studies and philosophy of science.

The research program will include international symposia and seminars with leading scholars, including Melvin Konner, Sarah Coakley, Simon Conway Morris, Wentzel van Hyssteen, Niels Henrik Gregersen and Angela Creager. There is funding for research fellowship that have been made possible by support from the John Templeton Foundation.

She projects that outcome of the project will likely be varied and possibly culminate in a book and cherishes the effort brings together the discussions of humanity’s future as well as questions of responsibility from a religious and scientific perspective. The research program seems consistent with a career dedicated to considering numerous viewpoints to bring clarity of action as most valuable way to merge faith and science.