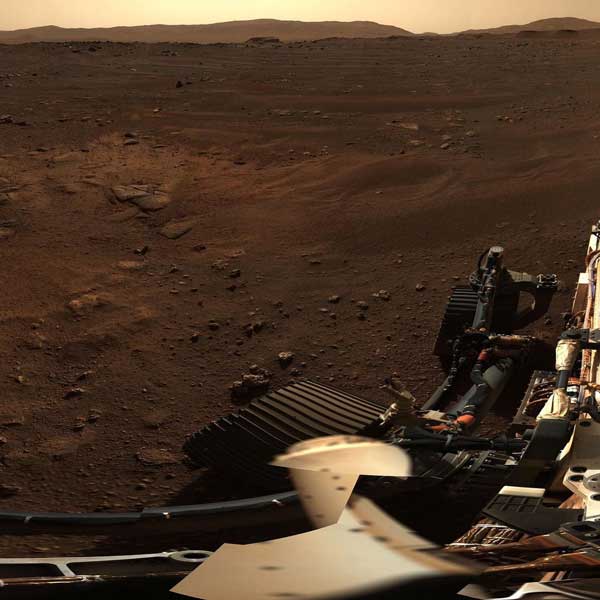 High-definition panoramic image from NASA Perseverance's Mastcam-Z reveals the rim of Jezero Crater and cliff face of an ancient river delta in the distance. Photo by NASA/Public Domain

Ted PetersTed Peters is a pastor in the ELCA and Emeritus Professor of Systematic Theology and Ethics at Pacific Lutheran Theological Seminary in Berkeley, CA. He co-edits the journal, Theology and Science and is author of God – The World’s Future (Fortress, 3rd ed., 2015).
Share
Tweet
Share
Pin

(Editor’s note: This article was originally published in February 2019. Covalence revisits this topic in light of the recent landing of the Mars Rover Perseverance and the implications of our exploration of the universe.)

How big is God’s creation? The size of our nation? Our planet? Our galaxy? Or, the entire 94 billion light-year-across universe?

The contrast between the immensity of God’s cosmic creation and our minute human size is dramatic.

When I look at your heavens, the work of your fingers, the moon and the stars that you have established; what are human beings that you are mindful of them, mortals that you care for them?

Can we fully appreciate the vastness and the splendor of God’s cosmos from our sequestered location on a tiny planet nestled between the Sagittarius and Perseus Arms of the Milky Way?

Astronomers, astrophysicists, and astrobiologists daily gather data to expand and deepen our awareness of the magnificence and beauty of what God’s fingers have set in our heavens. Thank God for our scientists!

Enter the new field of astrotheology. Astrotheology is that branch of theology which provides a critical analysis of the contemporary space sciences combined with an explication of classic doctrines such as creation and Christology for the purpose of constructing a comprehensive and meaningful understanding of our human situation within an astonishingly immense cosmos. Astrotheology is not a field set off on its own. Rather, it is a branch on the larger systematic theology tree.1See the new publication: Astrotheology: Science and Theology Meet Extraterrestrial Life, eds., Ted Peters, Martinez Hewlett, Joshua Moritz, and Robert John Russell (Eugene OR: Cascade, 2018).

What are the doctrinal loci or areas of concern for the astrotheologian? Here’s a list to start with.

Because of the ongoing discovery of exoplanets orbiting other stars in the Milky Way — nearly 4000 confirmed exoplanets as of this writing — Christians and other religious thinkers must ask this speculative question: are we alone? Might we share this galaxy and this universe with other sentient and rational creatures of God’s making? If astrobiologists do locate and identify extraterrestrial civilizations, will alien intelligence join us in thanking, worshipping, and praising God?

Many skeptics gloat over their own prophecy that Earth’s religious traditions will face a crisis and self-destruct as soon as we receive confirmation of ETI. This is a self-serving mistake. Along with former theology student Julie Froehlich, I conducted the “Peters ETI Religious Crisis Survey,” which concluded that self-avowed religious persons — Roman Catholic, Protestant, Buddhist, and others — would not become discombobulated from sharing our galaxy with new space neighbors. The only individuals who forecast a religious collapse are those who self-identify as non-religious. In sum, we have no religious or theological reason for compunction.2Ted Peters, “The implications of the discovery of extra-terrestrial life for religion.” The Royal Society, Philosophical Transactions A, 369 (1936) February 13, 2011; 644-655; https://royalsocietypublishing.org/doi/pdf/10.1098/rsta.2010.0234.

It’s time to put out the welcome mat.

But, the welcome mat is controversial. Active SETI (Search for Extraterrestrial Intelligence) and METI (Messaging Extraterrestrial Intelligence) have become contentious. It’s one thing for SETI to listen for radio signals broadcast from extraterrestrial transmitters. But should we deliberately send provocative messages to targeted star systems to wake up otherwise sleeping aliens and tell them to pay attention to us on Earth? Yes, says Douglas Vakoch, who directs METI International.3Douglas A. Vakoch, “Hawking’s Fear of an Alien Invasion May Explain the Fermi Paradox,” Theology and Science 15:2 (May 2017) 139-141.

If aliens are like European colonialists, we can expect an alien flotilla to invade Earth, strip us of our valuable resources, and either enslave or annihilate the human species. Therefore, the METI critics fear, we earthlings should electronically hide from extraterrestrial discovery.

Whether the scientific community acknowledges it or not, it is grappling with what theologians label, sin. Having noticed the sinful state of human life on Earth, it’s only natural to project it imaginatively to off-Earth peoples. Our scientists are already doing theology without a license. Therefore, this public debate is not one real theologians should avoid. Meeting sin with gracious forgiveness is a habit we should have cultivated some millennia ago.

Astrotheology benefits from the research of astrobiology, but both disciplines must remain speculative until empirical evidence demonstrates that we are not alone in this universe. That speculation should include tentative plans for greeting new space neighbors, demonstrating hospitality as well as curiosity, and embracing a sense of the common good that is galactic and not merely anthropocentric or even geocentric in scope.